The Two Extremes of Africa (My Peace Corps Experience — Part I)

I arrived to Lusaka, the capitol of Zambia, directly after spending time in Rwanda trekking gorillas. One thing to understand is that there is not a “budget” option to do this activity in Uganda or Rwanda. The permits are limited to eight tourist for each habituated group, for one hour per day and most often permits must be purchase far in advance. The cost is five to seven hundred and fifty dollars depending on the country you choose to visit. Therefore, you will not see backpackers or the “budget traveler” doing this activity. This was the one place, probably more than any other country I have ventured, where most tourists have traveled abroad quite a lot. I met some really wonderful people but I will have to say it was one place I felt, at times, there was a “keeping up with the Jone’s” mentality about where people have traveled. Example? —“Oh, you have traveled to British Columbia. That is near where I was raised. How did you like it?” Response: “It was wonderful. We went to see the glaciers. We have seen glaciers on three continents”. Not knowing how to reply I responded, “Nice.” That literally is how that conversation went and ended. I tell you this story to highlight how I went from one extreme in Rwanda to another when I arrived at Mogul Guest House were the Peace Corps Volunteers were to also arriving for a three day conference.

I was meeting up with friends of mine, Scott and Gina, who decided to join the Peace Corps for a two year term. They have been living in Zambia for fifteen months as part of the Peace Corps Organization. During their conference days, I was going to take this three day opportunity to catch up on my blog, do some shopping and get additional visa pages at the U.S. Embassy before we all went on safari in east Zambia. As I arrived that night, the volunteers were doing a different type of bragging than in Rwanda…. “Well, I got here on one mini-bus ride from my village for 3,000 Kwatcha, then I got a hitch all the way to Lusaka and the driver bought us lunch. He even went out of his way to drop me off.” Response: “Wow…Okay, you win.” All the guys circled around the group nodded their heads in agreement. (By the way, 3,000 Kwatcha is about sixty cents.) And so my Zambia experience, a different kind of experience, began.

One thing to understand is that the Peace Corps Volunteers in Zambia make about 50,000 Kwatcha or ten dollars per day. Even though the Peace Corps advises them not to hitch hike it is done with a “nod, nod, wink” because some volunteers live so far out in the bush there is not even an option of a minibus to their village. Volunteers get a little extra travel money to attend their “required meetings” to the capital city but not “per diem” as we would in the states. So their money does not go very far in covering the costs of the expensive capitol of Lusaka. I can tell you all first hand that there is no “travel-gate” during this Peace Corps conference. The guest house can fit twenty people in rooms normally. The Peace Corps fit all thirty-two fisheries volunteers in this guest house. The hotel had to add beds to rooms and dismantle the reception area to make a sleeping porch room with several beds. At first, volunteers were not excited about the sleeping porch accommodations. However, the hotel tried to sweeten the pot by offering volunteers who opted for the sleeping porch either five beers or a free movie pass per day. Needless to say the reception area was happily occupied. Peace corps paid about sixty dollars per room. So again…No “travel-gate” here….If only our country could be this frugal in the rest of its spending then I am sure we would not have a 14 trillion dollar deficit. My suggestion, let the Peace Corps organization approve all spending.

I stayed with Scott and Gina and my sheets were in tatters. I quickly learned that a few Kwatcha or twenty to sixty cents per day with staff went a long way. I think Gina, Scott and I shared the cleanest room in the place. At least our room was the only room that was cleaned everyday. I even received new sheets. 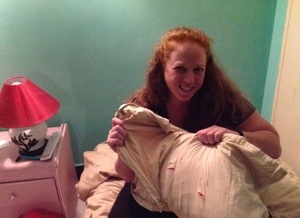