My Days with a Balinese Princess — Part II, LEARNING TO PRAY IN BALI

Ratih invited me to join her on a tour she had previously scheduled for another travelor. I knew the tour would visit a couple of temples and we take a drive through rural Bali but I had no idea what an amazing day she had planned…..

Every day begins the same in any Balinese household and business. Offerings are prepared to give thanks to God and to receive blessings. One type of offerings is made by putting bits of rice on a squares of banana leaves and placing these offerings around the outside of the house. Other offerings include square boxes made fresh each morning out of coconut leafs then filled with petals of flowers and grass. These offerings are then placed around the home and a burring incense stick is added. “What are those for?” I asked looking at the handmade containers with the petals. “An offering…. These are for the angels.” Ratih explains. I continue reading my book as the morning routine, of making and placing offerings, continues as it had the previous two days.

Every home and business prays everyday. Every day, everyone I observe in Bali is taking time to create similar offerings and say thank you to God. At some point I am told that there is one God. Confused, since I thought I had finally understood the basis of the Hindu religion from my travels in India, I asked Ratih, “I thought the Hindu religion had multiple deities but there were three main gods, Brahma, Vishnu and Shiva?”

“No, there is one God….Brahma, the creator, Vishnu, the protector, and Shiva, the destroyer, are manifestations of the same one God.” When I was in India it was hard for me to grasp the main points of the Hindu religion since when I traveled it seemed as though I received different answers from different people. But I was in another country so I decided to give it one more “old school try” to understand.

After a beautiful drive among the rice terraces and lush jungle scenery we arrived at the base of Gunung (Mount) Agung. Mount Agung is the highest point on the island and the mountain is considered sacred. Besakih Temple sits on the slopes of this mountain and is considered the holiest temple in Bali. In 1963 the Mount Agung erupted and the lava flow missed the temple by meters flowing around the temple. The salvation of the temple was considers a miracle by the people. “We alway remember the Twin Dragon. When he is sleeping the mountain stays calm.”

The drive up the road is slow as we approach. In between the slowed vehicles, motor bikes continue to inch forward. In any space left between the motor bikes and cars, people were filling the space. Many women balanced offerings on the heads as they walked.

Today happens to be the day after a full moon and considered holy. “It is also the day of the year when Balinesse give thanks to god for the blessing of metal. Have you noticed the flowers and leaves on the cars and motorbikes?” “Yes. I was wondering what that was about.” “Those are offerings. Giving thanks for metal used on our vehicles. That is why there are so many people here today. Besakih is considered the most holy place so everyone from the island comes at least once a month to pray at this temple. Some people come as early as four in the morning and they will be arriving all day to pray.”

Ratih has prepared a gift of clothing for both of her guests. We stop at a rest stop near the temple to change into our new clothes. “Does this look right?” I ask Chad, Ratih’s other guest. “I don’t know. Ratih helped me.”

Soon our guide had appeared around the corner. I had put my sarong on upside down. We return to the restroom together and Ratih assisted me. I came down the hallway and the women sitting at the bottom of the restrooms looked up, gave me a big smile and thumbs up.” I understood I was now dressed properly.

Raith, Chad and I proceed on foot up the hill. The entire surroundings was stunningly beautiful. We proceeded up the steep steps to the area designated for prayer. Raith had prepared offerings so that Chad and I could participate in the worship and receive a blessing. It is one thing for a tour guide to show you a temple and talk about the traditions but it is so much of a deeper experience to participate in the traditions. Participation is exactly what Ratih had planned for our day.

She handed us the offerings she had prepared and lit our incense. We then walked to sit with the others praying at the temple. We took the first flower, which represents beauty and waved it in the incense. “The incense is a witness to your prayer.” Then we clapped the flower in our hands with our palms touching together and placed our praying hands up to our forehead. Ratih told us “Now you can say your own prayer God.”

We repeated this two more times. Each time getting a new flower from our dish and waving it in the smoke before saying our individual prayer. After the three prayers were completed, holy water was passed from others in the crowd for us to use for our blessing. A flower was put in the water and sprinkled on us three times. Then rice was taken from the common dish and a few grains were placed in the middle of our foreheads. A sign that we had been blessed.

In Bali families usually stay at the temple after their blessing to have a picnic lunch and enjoy their time together. We had more places to tour and were on our way.

After a short drive we had lunch overlooking another active volcano called Gunung Batur. “This mountain erupted when I was having lunch here just over three years ago.” It was an amazing crater with a lake below. The lava flow from 2009 was visible on one side of the mountain and nothing appeared to be growing in that space.

After lunch we were headed on to our next sacred sight named Tampaksiring. Here the water springs up from the earth. One can visibly see water bellowing up from the earth as plumbs of sand puff up in the clear water. From here the holy water runs through a canal system that pours water out in a series of fountains.

Raith has brought everything we need to experience the purification of the holy water. We take our flower offering and burning incense and wait in line for our turn to be touched by the flowing water. At the first fountain we leave our offering. We know to let the water touch our face, then we taste the water and finally have it run over our head. Afterwards we are to line up for the next fountain in the series. We know to skip the two fountains that only those experiencing death attend.

Many adults waiting in line have smiles on their faces. Many parents are sharing this time with their children who, of course, are having the time of their life while they are waiting in pool for the next fountain. The children are all giggles when it is their turn to duck under the fountain.

There are other adults who are visibly injured and some with long faces who are seeking some kind of peace. One couple behind me had an offering for each fountain, not just the first, and then I noticed that this couple did not skip the fountain for death and their eyes had become red and glossy. I said a prayer for them and hoped for relief.

After we finish at the fountains of purification we ready to enter the temple behind the spring at Gunung Temple. Here we followed the same rituals we had learned earlier that morning which included a series of prayers and offerings. We are blessed a second time with rice and have received the sacred purification waters from the fountains.

I must admit that I still don’t understand a lot about the Hindu religion but I do think I have more of an understanding now that I have experienced some of the traditions firsthand. I also understand that the Balinese people have their own flare to their religion which is impacted by their island culture and ancient customs. They also have a deep regard and spiritual practice for their ancestors as well as other spirits and angels. In Bali you will also find many statues with bulging eyes and angry teeth meant to keep bad spirits at bay.

While I have been here I have heard several times of the importance of balance; The good and the bad, the ying and the yang, the male and female. Ratih also spoke about the importance of praying. “It is important to be still and pray. So much poison can get in your eyes and your ears which can trouble you. You much have some quiet (so you can handle the world).” Now, doesn’t that make a lot of sense?

People in Bali do seem to pray continually. Even though they are working, every business and every home has reminders all around them which remind them of their God and to be thankful for their blessings.

When I was young I asked my mom why why put ashes on our foreheads on Ash Wednesday. I remember her saying, “It is a outward and visible sign of a inward and spiritual faith.” I am reminded of this here….. We may not always understand the traditions of others but maybe some of those traditions are just the outward signs which brings individuals closer to their faith and God.

The important things I learned today from Ratih is how similar we all are even though our customs are very different. How we are all searching for answers and how we all searching to cope with life and loss and struggles. That balance and quiet moments are important to preserve oneself. And finally, I walk away thinking that if all people in the world prayed to their God as much as the Balinese, then wouldn’t this be a changed world indeed. 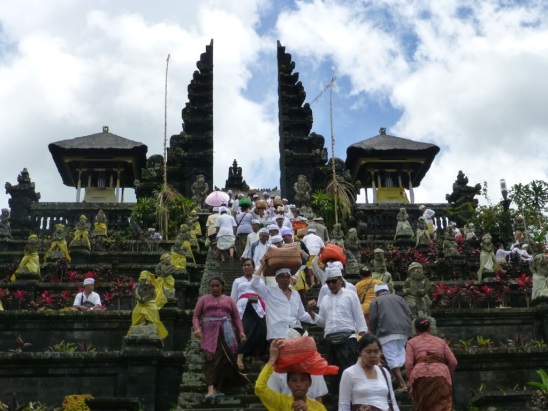 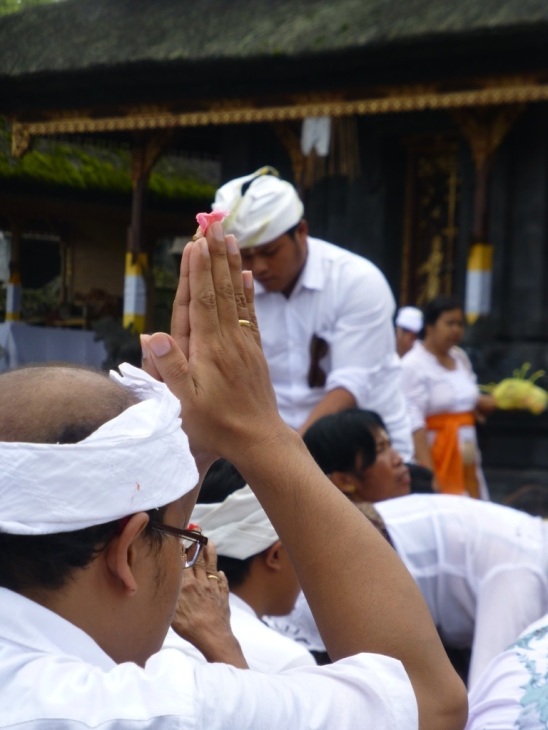